Wow, what an end to the year 2018! The year started with such high hopes: We saw the S&P 500® gain almost 6% in January, only to be followed by a 4% retreat in February. Not all that bad really – still positive at that point, and that index eventually rallied another 7% through the end of September. But then “chaos” struck.

From the end of September through just after Christmas, we have seen the Dow Jones Industrial Average fall by 16%, the S&P 500 by 18%, the Nasdaq by 22%, the MSCI EAFE by 16%, and the MSCI Emerging Markets Index by 10%. Pair those negative numbers with a formerly low-interest-rate environment that has been experiencing an overall increase in interest rates, and investors have experienced a rather frustrating year for portfolios. Actually, 2018 has experienced the highest percentages of calendar-year losers in a generation when you evaluate the 15 common asset classes. 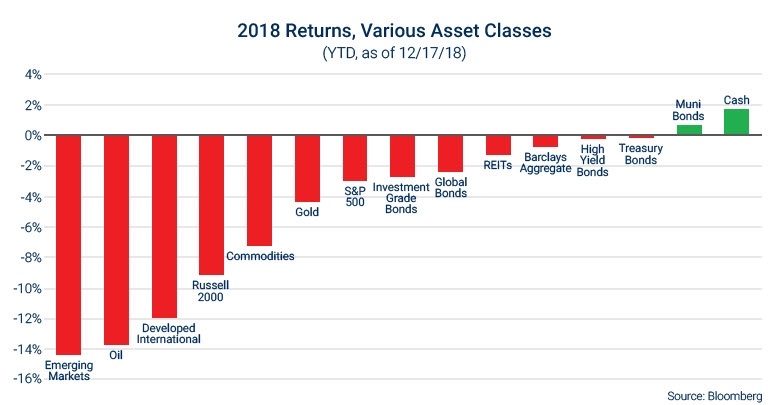 But what does this actually mean for you?

Well, first consider your objective. Market volatility can certainly cause nervousness and fear, but what, who, and when are we investing? Although we tend to view some things on a week-by-week basis, remind yourself of what your goals indeed are. Are the funds you are investing set aside to purchase something next week? Or are you hoping to have some funds put back in the event you need to pay for long-term care?

Better yet, what if your goal is to have some funds saved for your kids one day in the future? Whenever chaos happens, we tend to be more shortsighted with our thinking. We forget to focus on the “why” and we focus on the “what.” Stress can inhibit our ability to focus on anything other than the specific event that caused that stress, but we are here to help you see the “light at the end of the tunnel.”

Do you remember “Black Monday”? October 19, 1987, contained utter euphoria for many. We had discussions among our team and the day was different for each of us. Some were in college, some were watching Scooby-Doo, some were not even born, and some were looking for jobs in the “want ads” (remember those?).

For those who are not familiar with the term “Black Monday,” the Dow Jones Industrial Average (DJIA) fell an unprecedented 22% in a single day. We mention this to put things into perspective, as each of those phases of life sparked different emotional reactions. Whenever we’re in the eye of the storm, we often forget that we’ve been here before, especially when it comes to dealing with the stock market. Although the world today is obviously different from how it was in 1987, the market is still the market. It goes up and down, and history has shown us that the markets do tend to recover over time. Even after such a drastic move in the fall of 1987, the market recovered in six months.

So, what should you do? First, take a deep breath and remind yourself why you are investing in the first place. Think about your life, your family, the potential expenses you might have in the future, and consider when you might need access to funds for those items. The most successful investors we have worked with over the years are the ones who can separate logic from emotion when making investment decisions. Most people have owned Apple stock (AAPL) over the years because they have seen the booming demand for the iPhone and other Apple products. But AAPL is down around 33% since its end-of-September price. Does this mean that people have suddenly stopped buying iPhones? Stopped all together we think not, but they could be slowing. The important thing to remember is that Apple along with many other businesses are made up of parts and not all of their revenue is tied to phone sales. Think about the air pods you listen to your music with or iTunes. These are other sources of revenue for Apple.

Next, think about your alternatives. If you are expecting a major purchase fairly soon, put those funds in cash or cash equivalents. Access to those funds would be of highest priority, so you wouldn’t necessarily want there to be much fluctuation in the principal value.

But what about the expenses you expect in the next 5-10 years or even further? You could leave those funds in cash, earning, say, 3% historically. But if you consider a historical inflation rate of 3%, you’re just breaking even. Most investors prefer to beat inflation so invest in stocks and bonds. Bonds are debt for companies, so you are loaning money to a company to help it finance operations. Bonds typically pay an investor interest and at some point in the future pay back your principal.

What if the stock market goes to “0”? Take a step back and consider the question. If the stock market went to zero, we would be betting that the largest 500 companies in the U.S. would be going out of business (considering the S&P 500 index). Now if that were to happen, think about the lost revenue that the U.S. Government would experience through the loss of taxes. Not only would the companies not be paying taxes anymore, but the people who work for those companies would not be either. Could this happen? Conceivably – but highly unlikely! Consider the magnitude of how that would affect the world. Think about everything it takes to operate a business. There would be no buying power for ANYTHING anywhere. The U.S. economy is the largest by far, and if it seeks to exist, then pretty much every other country in the world would be in the same boat.

Finally, be patient while making long-term investment decisions. When you’ve had to consider a job opportunity in the past, did you ever make a decision immediately? Or did you take time to review everything and think about how it might shape your future? The term “invest” can become short-term when we’re emotional, but reality tells us that it is more of a long-term word. The most highly skilled professionals in our workforce today will say to you about how they invested time in their craft.They were spending time when they started, but their expectation was for a return that happened in the future, not within the next week.

We encourage you to hang on through this latest downturn. It may get uglier, but our experience has been that those who get rewarded over time are the ones who remain patient and persistent. If you have any questions or concerns, please call someone on our team. We have a group of five who dedicate every day to helping you make sound financial decisions, and we certainly do not take you for granted.